Researchers continued to explore emergent, unusual properties that thorium presented throughout the 1940s and 1950s in a variety of scientific disciplines. That research continued into the 1970s and later. Early on, it was discovered that thorium compounds can form so-called Laves phases, eponymously named for its German discoverer. A Laves compound is an intermetallic phase that adopts the AB2 stoichiometric ratio and very often displays high-symmetry motifs (Body-centered Cubic, BCC; Face-centered Cubic, FCC; hexagonal, close-packed, HCP). Thorium and magnesium atomic radii fall within this “sweet spot” for Laves phase formation (1:1—1.67:1). The resultant intermetallic, colloquially abbreviated Magthor, demonstrated desirable characteristics as a binary alloy, including very modest creep at elevated temperatures, limited/benign surface oxidation and good tensile strength. Although operationally, a phase change is undesired, the cubic ß phase was found to be stable, after its high-temperature transform during fabrication. See Figure and Table, below.

Much of the details, manifests and serial numbers for the many of the aircraft engine components, military tanks and nuclear missile casings remain either classified or heavily redacted in FOIA requests. Three early examples of Magthor and thorium-alloy usage in aviation and space programs, however, were NASA’s Gemini space program, Convair’s B58 Hustler (Magthor) and Douglas’ Model 684 High Altitude Research Airplane (HK31, aka “TZ6”, see Figure, Table). Intense competition among the aviation companies in the 1950s appeared to promote equally intense materials-science research, and the Douglas Model 684, the predecessor to the X15, was no exception. Douglas engineers chose the HK31 alloy as the skin and the separable nosecone for the Model 684, as well as for a number of peripheral engine and structural components. Over the alloy Inconel, they cited, among other comparatively superior properties, HK31’s light weight, ease of machinability, lower cost, impressive moduli, tensile strength, and heat capacity. Inconel’s structural stability up to 650°C exceeded the lower, 300°C creep limit for HK31. This is cited as the primary reason why the Model 684 was passed over.

Another example of Magthor’s broad utility was in the ATMX-500 and 600 series armored rail cars. The Magthor used on Union Carbide’s special 500 and 600 series railcar carriage plates were produced exclusively by Dow Chemical at their Madison, IL plant. These series of railcars were used to transport nuclear weapons, Magthor turnings intended for recycling, spent solid and liquid nuclear waste, and other manufactured, raw and processed uranium, thorium; their respective salts and oxides and other interim materials to and from Rocky Flats and other facilities. Structural and floor- and wheel-panel components for the ATMX-500 and 600 railcars were specifically reinforced using Magthor, though not to contain a nuclear explosion. In addition, specially fitted Fruehauf semi tractor trailers using the HK31 and HM21 type alloys (see Table 1) were created for terrestrial hauls. Dow supplied almost all of the Magthor alloys, including, HK31A, HM21A, HM31A, HZ32, HZ32A and ZH62A (see Table 1), used by the military from 1957-1960 (with approximately 64 metric tons of pure thorium coming from Canada, the balance (16 metric tons) coming from Dow plants in the U.S.). Dow Madison continued to produce thorium alloys at their Illinois plant, and to a lesser extent, the Dow Bay City and Midland, MI plants, until as late as 1992. Materials and equipment transfer to the Rocky Flats weapons production facility over the ensuing decades was seamless, given that Dow Chemical managed Rocky Flats from 1952-1974. Much of this processing was performed in Building 440 at the Rocky Flats Campus. From time to time, the Mallinckrodt Chemical Company was given permission by Dow to operate at Rocky Flats, where they processed some of the cruder uranium and thorium materials for subsequent machining and transport to their St. Louis, MO facility. It is not conclusively known whether Magthor turnings and other thoriated binary alloy waste were recycled.

Figure: The ATMX 500 Series Rail Car, prior to its armoring/reinforcement 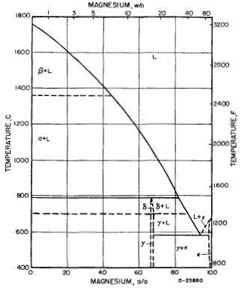 Notes: a) Letters are arranged based on percent concentration: 1st=highest concentration (wt%), 2nd=second highest (wt%), etc. b) Each number in the alloy codes refers to wt%, rounded up to the nearest whole number, for each element, respectively. c) these single-digit representations are intended to represent the additives; the double-digit balance was magnesium (see Figure 3), so the letter “G” was excluded. 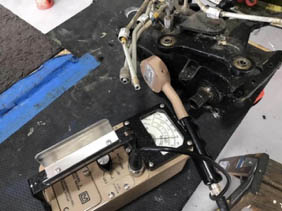 Figure: an aircraft bracket made of HK31 alloy (black object with metal lines coming out).

Niobium Thorium
Thorium has a widely varied, but largely lost metallurgical history in terms of its binary and ternary alloys. Work on thorium binary phases began in earnest as early as the 1940’s. Basic information on 63 thorium binary materials and their phase data were compiled. This was somewhat cursory, however, and did not go into depth on each material’s performance characteristics.

Chromium Thorium
Based on the information found, why the chromium thorium alloy was not chosen over its more popular analog, zirconium thorium, remains unknown. Cr-Th (Cr 8%) was unusually intermetallically soluble.