Thorium: A Brief History of Discovery and Usage

Thorium (chemical symbol Th) is a naturally occurring, slightly radioactive metal found at trace levels in soil, rocks, water, plants and animals. Thorium is solid under normal conditions. There are natural and man-made forms of thorium, all of which are radioactive.
Thorium is a weak radioactive element of the actinide series. It is chemically represented as Th, with an atomic number of 90 and atomic weight of 232.03. It is inherently unstable; all of its isotopes are radioactive. The only known isotope is 232Th, a metal, and has half-life equivalent to that of the universe: 14.05 billion years. This is significant. It is one of the only two naturally occurring actinides, Uranium being the other. Since Thorium occurs naturally, it can be mined and its radioactive properties harnessed. Thorium begins its slow decay cascade with an alpha emission. The decay chain is known as thorium series and results in stable 208Pb.

Thorite is a nesosilicate (formerly called orthosilicate) with a tetragonal crystal structure (space group: I41/amd). Thorite itself has been found in Norway (first), Germany, Canada, Madagascar and in the American states of Texas and Colorado. 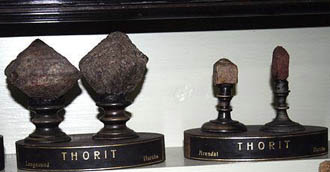