Uses – From the time it was first discovered until Marie Curie’s revolutionary breakthrough discoveries in radioactive elements, Thorium didn’t seem to garner much attention in the emerging world of material science. The first significant use, the Welsbach Mantle, although important to early lumination, was limited in overall scope.

It wasn’t until the dawn of the nuclear era that Thorium was increasingly studied and considered as a nuclear fuel. During the height of World War 2, speed of development was crucial to the Manhattan project. Because Thorium was in greater abundance than Uranium (and easier to mine and process) it was considered as a nuclear weapons material (to breed U-233 as a fissile material) for some time but was ultimately discontinued. Metallurgy and nuclear fuel research continued to investigate how a Thorium – U-233 breeder reactor could be constructed and used to breed weapons-grade materials.

Not long afterwards, scientists at Oak Ridge National Lab (ORNL) began to investigate a Molten Salt Reactor (MSRE). The MSRE was a small test reactor was the basis for an entirely new reactor type that was deemed far more simple and reliable than the fleet of water-cooled reactors. 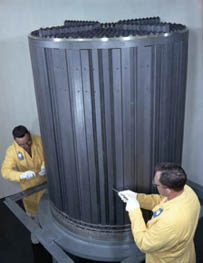 Concurrently with research at ORNL, investigations into Thorium’s metallic properties continued in various private and federal research facilities. One promising avenue that was extensively studied was MAGTHOR, the metallic alloy of Magnesium and Thorium. These alloys were utilized in the expanding space mission and aerospace sectors for their high strength and other characteristics especially under elevated thermal loads. Other uses began to emerge (optical coatings, chemical catalysts, welding electrode) as you can read in the following pages. Due to the slight alpha particle radioactivity, most civilian applications have tapered off in lieu of non-radioactive material replacements, due to liabilities incurred.