“Since the beginning of the nuclear era, significant scientific attention has been given to thorium’s potential as a nuclear fuel. Although investigations have been carried out on thorium-based fuels, and thorium-fueled power reactors have operated in the past, the thorium fuel cycle as a whole has never been fully developed. Today, the opportunities and challenges that could arise from the use of thorium in the nuclear fuel cycle are still being studied in some countries and in the context of diverse international programs around the world.

In parallel with the rise of various thorium advocacy fora in recent years, the use of thorium as a nuclear fuel has been gaining considerable attention in the media, where it is sometimes portrayed as a ready-to-use and risk-free solution to the world’s energy problems. Such oversimplified representations of thorium’s potential could however lead to misconceptions about thorium among decision makers and the general public. In reality, the thorium fuel cycle is a complex subject even for those familiar with nuclear technology. Any novel fuel cycle proposal must be assessed not only from a multidisciplinary, scientific perspective, but also from economic and industrial points of view, each within the broader context of well-established nuclear energy strategies. (NEA 2015)

From the early days in the development of nuclear energy, thorium was considered a potential fuel that could possibly supplement or even replace natural uranium, which at the time was considered to be scarce. The New Piles Committee, created in April 1944 in the United States to explore a variety of reactor concepts (then called “piles”), recommended that “more work be done on the nuclear development of thorium because of its greater availability” (Lawson and Krause, 2004). The New Piles Committee also suggested experiments to develop reactors that would convert thorium to 233U. However, in the years that followed, it was discovered that the supply of natural uranium was not as limited as projected. Also, thorium lacks a fissionable isotope: it is impossible to start any fission chain reaction purely on mined thorium, and therefore any nuclear system relying on thorium would be initially dependent on prior generation of fissile matter (extracted from uranium or bred in uranium systems). Faced with these two factors, interest in thorium declined or fell into abeyance.

The situation with uranium was entirely different; natural uranium, which contains 0.71% fissile 235U, provided the fuel for heavy water and carbon moderated reactors which did not require any enrichment of 235U. Moreover, the necessary enrichment capacity to provide the enriched uranium fuel required to operate light water reactors (LWRs) also existed. The plutonium generated in all these uranium-fueled reactor types provided an obvious route for developing fast breeder reactors, which could use the plutonium as fuel and generate, from 238U, more plutonium than they consumed. During the early days of nuclear energy, starting the uranium/plutonium fuel cycle was therefore the obvious route to “fuel independence” for the main nuclear developing countries.

Today, the availability of fissile material (plutonium or enriched uranium) that arises from the well established uranium/plutonium fuel cycle makes the implementation of thorium fuels feasible in principle, although the necessary economic drivers for devoting significant industrial resources to that end are not yet clearly established. 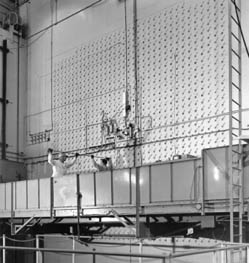 It is worthwhile to mention that the initial idea of “thorium converters” was submitted in early 1944 by Eugene Wigner, as an option for producing an atomic bomb using 233U as the fissile material. The proposal of using thorium for nuclear reactors was then brought up again in the framework of the New Piles Committee, which included the most eminent physicists and chemists working in the area of nuclear reactors. It should also be noted that, at that time, nuclear reactors were an entirely new technology, since the first man-made fission chain reaction had occurred less than two years before.”

Reprinted from:
Introduction of Thorium In the Nuclear Fuel Cycle 2015 Nuclear Energy Agency No. 7224