Since Thorium is fertile and not fissile, it needs a neutron source to start the reactions. Like lighting a match to start a fire of normally inert wood.

Many inherently safe reactors have been proposed. These systems would be driven by an accelerated beam of one species or another to create a neutron source that takes the place of a seed fuel like Uranium or plutonium.
In theory, as the fuel became critical, you could back off or turn off the beam and bring the system back sub critical. The Lab at Virginia and the Jefferson Accelerator as well as Fermi Lab in Batavia Illinois have both proposed accelerator driven systems using Thorium.

These do appear to have a large amount of added complexity in order to get a marginal increase in inherent safety that has not been proven to exist.

However, these do hold great promise as near zero power reactors for breeding rare isotopes such as the 213Bismuth mentioned elsewhere in this compilation. Thorenco Inc proposed such a system driven by an electron beam in 2013 with work being done by PNNL to prove out neutronics and end of cycle inventory of elements. 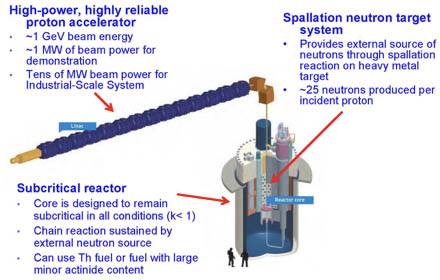 The Molten-Salt Reactor Experiment (MSRE) was an experimental molten salt reactor at the Oak Ridge National Laboratory (ORNL) researching this technology through the 1960s; constructed by 1964, it went critical in 1965 and was operated until 1969.

The MSRE was a 7.4 MWth test reactor simulating the neutronic “kernel” of a type of inherently safer epithermal breeder reactor.

The MSRE Never used Thorium as a Fuel. It primarily used two fuels: first uranium-235 and later uranium-233. The Fuels were a stepping stone from most known, U235, to lesser known, U233, to the least well known, Thorium 232. The final fuel load was never achieved because of defunding. The latter fuel, 233UF4 , was the product of breeding from thorium in other reactors.

The result promised to be a simple, reliable reactor. The purpose of the Molten-Salt Reactor Experiment was to demonstrate that some key features of the proposed molten-salt power reactors could be embodied in a practical reactor that could be operated safely and reliably and be maintained without excessive difficulty. For simplicity, it was to be a fairly small, one-fluid (i.e. non-breeding) reactor operating at 10 MWth or less, with heat rejection to the air via a secondary (fuel-free) salt.

The MSRE operated for 5 years. The salt was loaded in 1964 and nuclear operation ended in December 1969,[3][14] and all the objectives of the experiment were achieved during this period. 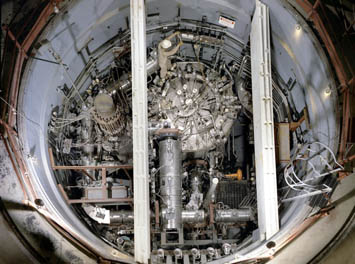 The Molten Salt Breeder Reactor more explicitly was designed to show that a 2 Fuel reactor with an inner core of Uranium fuel and outer blanket of Thorium could produce more fuel than it burned.

The design was produced in hopes of Molten Salt Reactors remaining a funded experiment during a time when only breeder reactors were being funded because of a fear that the world was running out of Uranium.
Since the MSRE precursor was an engineering test, the large, expensive breeding blanket of thorium salt was omitted in favor of neutron measurements. It was confirmed that a liquid fuel reactor would breed fuel. Later, the shipping port reactor was able to prove that breeding with Thorium did work.

The final funded design work on Molten Salt Reactors completed by the Oak Ridge National Lab was on a large “Denatured Molten Salt Reactor”. Essentially the simplest, safest design possible to allow the MSR type reactor to be commercialized and maintained at scale using the most available fuel.

The work remains the basis and reference for many aspects of current designs for MSR type reactors.

At the 2011 annual conference of the Chinese Academy of Sciences, it was announced that “China has initiated a research and development project in thorium MSR technology.”[42] In addition, Dr. Jiang Mianheng, son of China’s former leader Jiang Zemin, led a thorium delegation in non-disclosure talks at Oak Ridge National Laboratory, Tennessee, and by late 2013 China had officially partnered with Oak Ridge to aid China in its own development.] The World Nuclear Association notes that the China Academy of Sciences in January 2011 announced its R&D program, “claiming to have the world’s largest national effort on it, hoping to obtain full intellectual property rights on the technology.”

In early 2012, it was reported that China, using components produced by the West and Russia, planned to build two prototype thorium MSRs by 2015, and had budgeted the project at $400 million and requiring 400 workers.”
Currently two experimental reactors (approx. 2 MWth) are under construction in the Gobi Desert, with completion expected around 2020. The TMSR project expects to study 7 different criteria during the experimental phase: Thorium purification, salt production and purification, Nickle-based alloy production and testing, corrosion control, Tritium control, Graphite production and testing and Pyro-processing. The R&D effort will also focus on components such as vessel construction, graphite fabrication, valves, pumps, heat exchangers, etc. China expects to put thorium reactors (100 MWe) into demonstration use by 2030 with TMSR fleet expansion by 2040, utilizing 80% Thorium energy contribution.

China also finalized an agreement with a Canadian nuclear technology company to develop improved CANDU reactors using thorium and uranium as a fuel.[46]

India has one of the largest supplies of thorium in the world, with comparatively poor quantities of uranium. India has projected meeting as much as 30% of its electrical demands through thorium by 2050.
In February 2014, Bhabha Atomic Research Centre (BARC), in Mumbai, India, presented their latest design for a “next-generation nuclear reactor” that burns thorium as its fuel ore, calling it the Advanced Heavy Water Reactor (AHWR). They estimated the reactor could function without an operator for 120 days. Validation of its core reactor physics was underway by late 2017.