The Kingdom of Jordan could be the first country in the world to obtain all of its water and power from advanced molten salt reactors. There is an acute shortage of both water and power in the Kingdom to support the current population of over 9.5 million persons. If the Jordan Atomic Energy Commission were to construct approximately 9000 MWe of generating capacity, in phases, using molten salt technology they could generate enough water and power to support the population at a first world level of development. Molten Salt Reactors do not use water for cooling the core. This eliminates the need to have a large water supply available for their operation. Since Molten Salt Reactors operate at high temperatures, they will provide large volumes of process heat that can drive thermal desalination systems. William B. DeOreo, P.E., M.S., Aquacraft, Inc. Water Engineering and Management John Kutsch, V.P Terrestrial Energy, U.S.A. 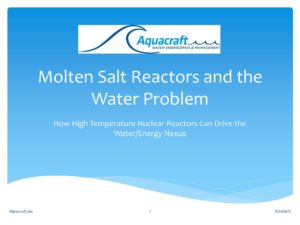