Federal Law requires that all U.S. defense systems be built with U.S. or allied components. The reality is that nearly every defense system in the U.S. arsenal is 100% reliant on China for rare earth materials and components. Even the small quantity of heavy rare earths mined in United States are shipped to China for processing. Solution: S. 2006 “The National Rare Earth Cooperative Act”. Bill S. 2006 was introduced as a standalone Bill in February 2014. Jim: “On May 19, shortly after a well-received bi-cameral Congressional Briefing to Armed Services and Natural Resource staff, we were informed that the DoD had taken direct action to kill this bill.” “We are now looking for a champion in Congress who is willing to force the defense industry to comply with the law.” 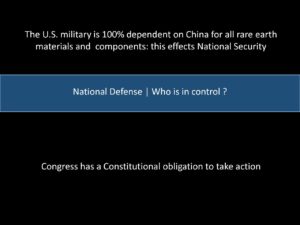